A Dress for Next Summer 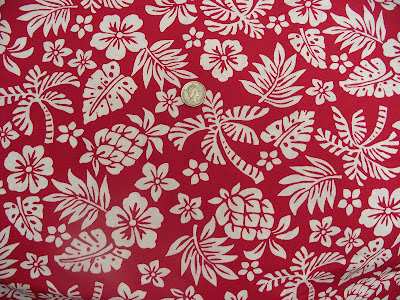 Nice and cheerful for a summer dress, which probably won't be worn until next year.  It is a cotton poplin, chosen by my daughter, who has a weakness for tropical designs.  She wants a fitted, straight-skirted dress.  Easier said than done, especially when she tells me "I want a zip."  If she knew how much psychological damage those four words have caused me, especially when thinking up a dress with lining.  I am a zipphobic and have decided to conquer the many-toothed demon.

Work so far has consisted of making a rough cut dress from an old duvet cover to get the size and position of the darts, then making a toile from calico to get a good fit.  I only stuck pins in my daughter twice.  No blood.  She accused me of direct voodoo, with no doll.  Then I unpicked the toile, ironed the pieces and laid them on tissue paper to draw the paper pattern.

The whole process has taken days, but the aim is to have a perfectly fitting dress for her so I can make another when she isn't here.  Had I used a commercial pattern I would have had to spend an age making adjustments, so I decided to draft my own.

Will I have the dress made before she goes back to university for the autumn term?  Probably not.