A Dress Half Made 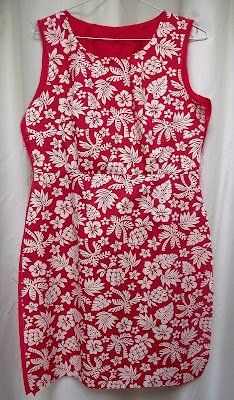 Unfinished but definitely taking shape.  After all the preliminary fitting and pattern drawing, followed by a mere 28 darts, shape is the operative word.  Even at this stage I can tell it could only be for my daughter.

For the lining I have used a light polyester and cotton mixture.  It is firmer than the usual 100% synthetic lining material, which I hate because it frays like blazes, slips around when you are sewing it, and has a nasty habit of ripping at the seams after a certain amount of wear.  Let's hope I have made the right decision, because I have a niggling fear that the skirt lining might ride up.  I can depend on my daughter to complain if it does. 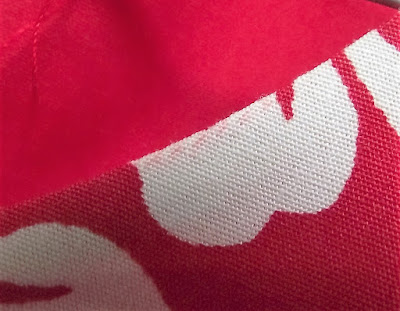 The dress and lining are joined so far only at the neck.  When I was pressing the seam with a bit of water to get a firm edge the thread did the dirty on me.  The red dye bled from the thread (admittedly it was fairly ancient) and I think I might have fixed it with the heat.  I am slightly miffed, but my daughter won't care a hoot because she isn't a devil for detail.  The photo here is by way of a moral tale for all the cheapskate dressmakers out there who think they can get away with using 30 year old red thread without testing it first.  This dress will definitely have its first wash with a dye catcher. 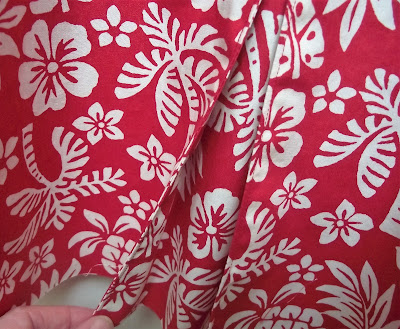 This is the kick pleat at the back.  To save myself from having to neaten the centre back seam, I cut the two back pieces along the selvedge, which, fortunately, was straight and not distorted..  The back seam is therefore a simple seam which is pressed flat.  For the kick pleat I had to cut a separate rectangle of material and insert it, using topstitched seams on each side.  The seams haven't settled down particularly well yet because I daren't give them a decent pressing until after the first wash.

Perhaps I should steer clear of the old thread from now on, which will be difficult because it defies my sense of economy.

The next stage is putting in the zip down the back.  I can't say I am looking forward to it.  We shall see.

Linking up to Connie's blog Freemotion by the River for Linky Tuesday
Posted by Muv at 8:00 am

Email ThisBlogThis!Share to TwitterShare to FacebookShare to Pinterest
Labels: Dressmaking