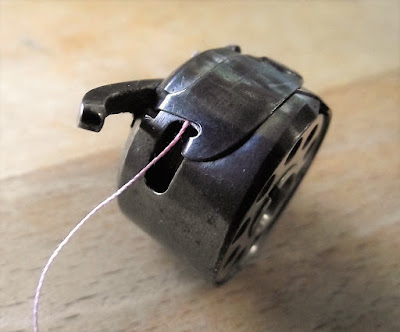 Last week, while free motion quilting with my Singer 15K treadle, there was a slight hiccup with the stitch.  On a couple of occasions the thread broke.  Then the tension was slightly off, with the bobbin thread loose and showing through to the right side.  Nothing was obviously wrong, the top and bottom threads were both correctly threaded, so I adjusted the tension both at the tension discs, and tightened the screw on the bobbin case.  I tested the stitch, and it seemed fine.

Everything went smoothly for a while, and then on two occasions the tension totally fouled up with massive loops coming up from underneath.  When I took out the bobbin case the thread wasn't in the right position, as above... 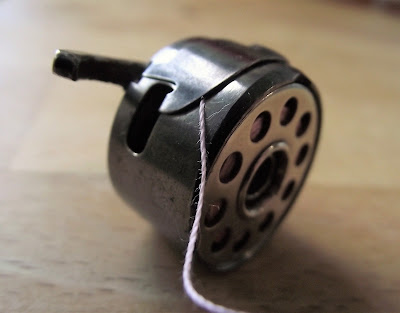 ...but it had slipped out of place, like this.

This has happened about three or four times in the past few weeks, and I had assumed I was being a bit careless and not threading the bobbin properly.  This time I decided I had to fix the problem.  When I pulled at the thread I found that if the bobbin is correctly threaded it is impossible the pull it out of place from the outside - the lip on the tension plate that curls under the edge of the hole prevents it from slipping.  The thread could only have shifted out of place from the inside. 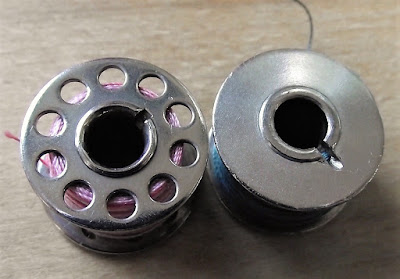 The culprit had to be the actual bobbin.

I had been using three bobbins in rotation, the old solid sided bobbin on the right (the only one I have) along with two newer bobbins with holes, like the one on the left.  I compared the old bobbin with the newer ones and found that it is a fraction smaller.  I don't think it is from another model machine; my guess is that over time the edge has worn away as a result of friction against the inside of the bobbin case as it has rotated.  Somehow this must have allowed a little too much play in the thread.

So now I have retired the old bobbin and I haven't had a problem with the stitch since.  I knew it wasn't the machine letting me down.