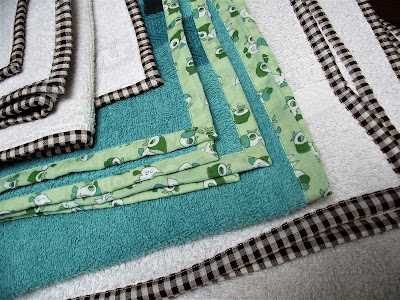 Ragged edges to towels are annoying and unsightly, especially when the towels have plenty of life left in them otherwise.  None of these towels was wearing thin at the middle, so I could not bring myself to throw them out.  The answer was to bind them.

The white towels, which ceased being truly white long ago, belonged to my husband's parents.  They are just the right size to wrap around my head after a hair wash.  The tiny brown check makes a pleasing contrast, and gives the illusion that the towels were bought as a matching pair.

The greenish turquoise towel is one of two given to us as a wedding present, so it will be thirty years old this year.  I can't believe it has lasted so well.  It has ended up with ducklings all round the edge. 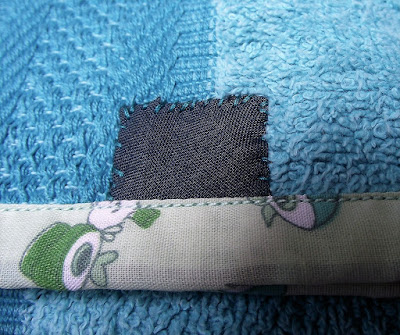 This project felt like something straight out of one of my old sewing books, with the emphasis on thrift.  For added authenticity, here is a tiny patch I had to sew where a serious tear was threatening to take hold.  An oddment of 1 inch bias binding was all that was needed to make the patch.

The material I used for the binding all came out of the stash left by my sister in law's mother.  Both the brown check and the ducklings are synthetics, which I thought would be better than cotton, which might have a tendency to retain the damp.

Three done so far, and I am eyeing up at least another two for the same treatment.  It would have been quicker and easier to go out and buy new towels, but binding the old ones has been so much more satisfying.

Email ThisBlogThis!Share to TwitterShare to FacebookShare to Pinterest
Labels: Make Do and Mend