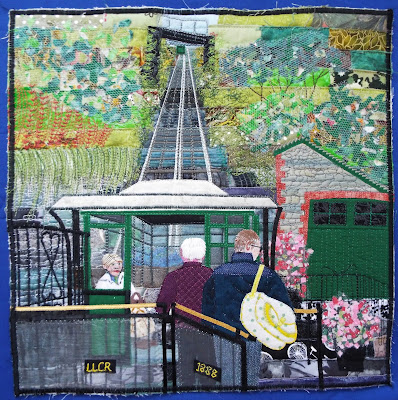 So lifelike, and instantly recognisable, I knew this quilt showed Lynmouth Cliff Railway as soon as I saw it.  It was hanging near the entrance to the Where in the World Exhibition, which was held last December at Midsomer Quilting.

It is by Lorraine Bourne, and the description she provided for the exhibition reads as follows:-

"My quilt is based on a photo I took.  It's constructed with raw edge strip work and confetti work, together with a liberal amount of appliqué.  I apologise to my son-in-law (on the right) for making him appear bigger than he is!  A listed monument, the Lynton and Lynmouth Cliff Railway links the two towns.  Opened in 1890, it's the highest, steepest completely water powered funicular railway in the world.  The views from the top are amazing - we loved it!" 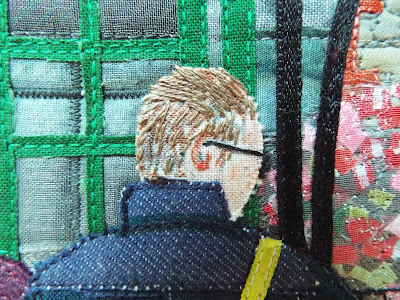 So here is the slightly enlarged son-in-law, who seems to be feeling the chill around his ears... 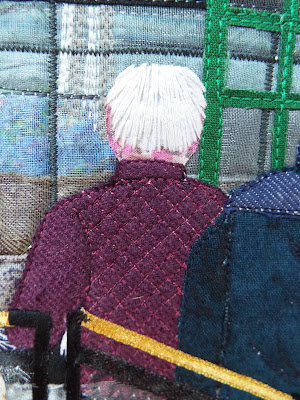 ...and the man in front of him in the queue, keeping warm in his quilted jacket... 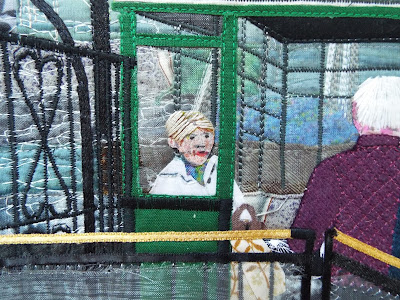 ...and the lady in the shelter with the perfect "get a move on" expression on her face. 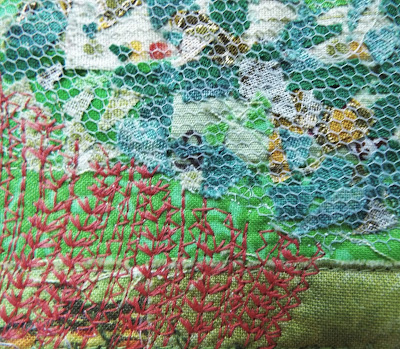 The jumble of undergrowth on the hill is a combination of raw edge strip work and confetti work, with added stitched detail. 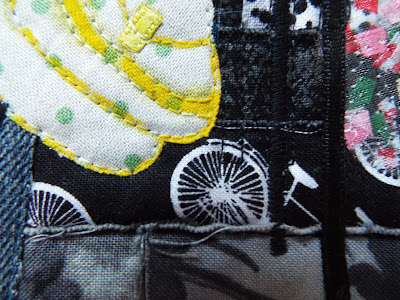 This bicycle print makes me laugh.  Even though it is totally the wrong scale, I always think the bike is chained to the railings. 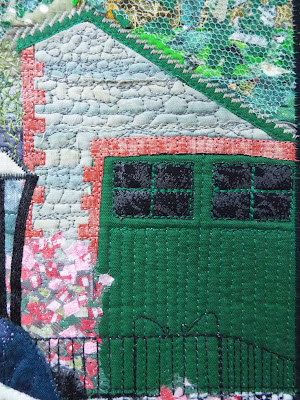 This is just perfection.  How many outbuildings like this have I seen over the years?  Hundreds.  The colours of the stone, brick and paintwork are exactly right, and thanks to this video I now know that this is where the driver makes his tea.

Because many of the quilts were up for auction, I was spoilt for choice when it came to deciding which quilts to bid on.  I ended up bidding on just two, this one and the Osborne Bull.  I was delighted when I found out that I had won both.  Making a frame for this quilt is now on my husband's list of pending projects.

Thank you Lorraine!  You have made an absolute treasure!
Posted by Muv at 11:49 am