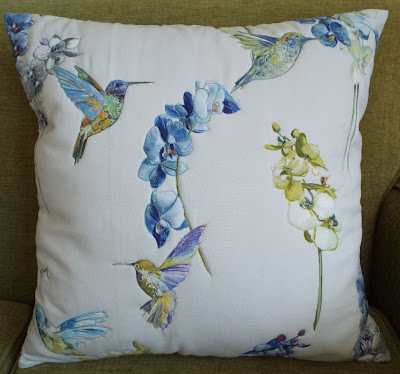 On the settee at last!  It seemed to take forever.  I thought I was slow starting this project, and it feels as though I have been equally slow finishing.

Much as I love the hummingbirds and orchids, the delay in starting was caused by the size of the design.  I only had a metre to play around with, and it was difficult to find the right section of it to cut the rectangle I needed so that an interesting part of the design was shown on the front of the cushion.  With the large areas of background, I found that it was all too easy to try and get certain elements to the front and then find a large gap would appear in the middle and flowers and birds would drift off to the edge.  In the end I managed to settle with three clearly visible birds and two complete orchids, one blue and one green.

The quilting was straightforward, outlining the design and leaving the background plain.  It was the construction that gave me problems, which was irksome, because after making three other cushions in the past few weeks, it should have been a pushover.  I blame the fact that I was getting over yet another bout of hay fever, caused by the harvesting in the fields near our house.  My concentration was sorely lacking.  To start with, I had forgotten to pre-wash the fabric.  Then I put bias binding on the wrong edge.    Next I had a real mental block trying to work out how broad the button band should be. 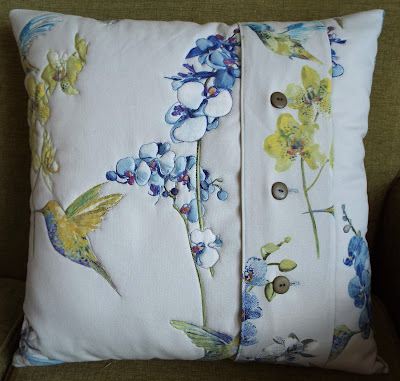 Then to cap it all I put the buttonholes a good quarter of an inch further from the edge than they should have been, so once I put the cushion inside the cover the buttons were straining.  I weighed up the options:-

1.  Move the buttons - pretty pointless, they are so near the edge I couldn't move them more than an eighth of an inch.

2.  Enlarge the buttonholes and sew on larger buttons - why cut the end of a perfectly good buttonhole and give myself some extremely irritating hand stitching?

3.  Check the cushion I had stuffed inside wasn't an exceptionally fat one - I swapped the cushion with the one inside the snakeshead cover and managed to reduce the strain on the buttonholes.  There is still a bit of a pull, but not nearly so much as there was at first. 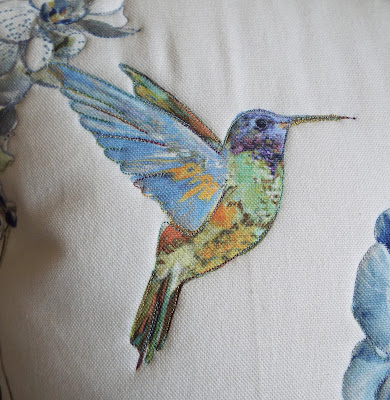 Despite all the bother along the way, I am pleased with the result, mainly thanks to this little bird, my favourite of them all, who is now hovering in the top left hand corner.

Today I thought I would have nice relaxing sit down, propped up by this cushion, and get on with some knitting.  Back in January I managed to leave a part-made baby cardigan at my brother's house, and I have only had it back since last month.  I decided that today was the day I should carry on from where I left off, so I cast on for a sleeve and made great progress.  Once I had knitted a couple of inches I realised I was making the third sleeve.

Is it me, or is it the cushion?

Many thanks to Angie for linking up last week with her lovely little baby quilt.  If you haven't seem her blog post yet, nip over now and see more:- 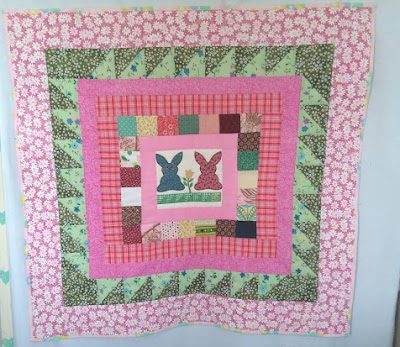 It's still hot (in places), so whether you are overheating in the northern hemisphere or shivering in the south, if you have no free motion quilting to show, feel free to link up and show any project you like.  Here are the usual rules, but feel free to ignore them.

Remember, FMQ is FMQ, whether your machine was made last week, or it is older than your granny.
Here are the very easy and slightly elastic rules:-