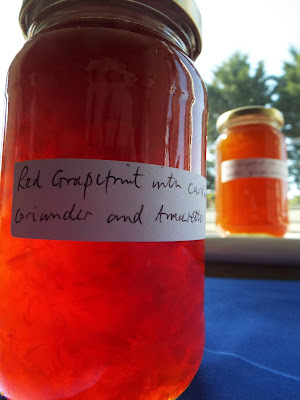 When everybody's world is turned upside down, my first thought is to wish you all well, hoping that you are in good health and coping with the confinement.

After spending the greater part of last week messaging my son and daughter, both of whom are in Ireland, and watching the developments here, it came as no surprise to find ourselves at home and living under restrictions here earlier this week.

In the midst of all the bad news, I had a great lift to the spirits last week.  This year I took the marmalade season especially seriously because I had found out about the Marmalade Awards at Dalemain Mansion in the Lake District. I entered five jars, and had to decide whether I was going to send them in the post, or hand deliver them to Fortnum and Mason in London for them to send on.  I decided not to risk the jars ending up upside down in the post, and went to stay with a friend in Berkshire so we could have a day trip to London.  It was the first time I had been to Fortnum's.  What a shop!  We spent ages looking at the china.  Looking at the food would have been far too tempting. 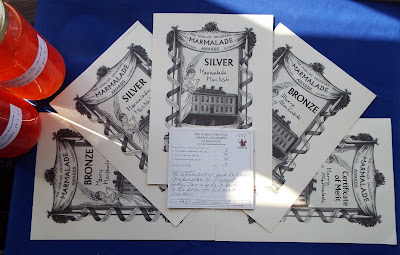 The actual Marmalade Festival at Dalemain had to be cancelled, but judging went ahead as planned, and I was thrilled to receive an award certificate for every jar I had entered - two silvers, two bronzes, and a merit.  My personal breakfast favourite, red grapefruit with amaretto, came bottom of the pile with a merit, whereas my least favourite came just one point short of winning gold.  I submitted three jars in the Merry Marmalade class, which was for recipes with added alcohol, and two jars in the Marmalade MacNab class.  MacNab was a new challenge for me, inventing a marmalade to go with meat, game or fish.  A chutney, but not, because no vinegar is allowed, and it needs to have the consistency and set of a marmalade.  I hit on the idea of a marmalade to go with duck, because I can remember duck à l'orange being all the rage in the 1970s.  As well as Seville oranges and a lemon, in went onions, carrots, beetroot, and an array of spices.  After potting up, I tasted a scraping from the pan.  Disgusting.  All I could taste was onions.  I have an aversion to raw onions, and pick them out of salads whenever we eat out and I forget to say "No onions, please!".  At home I cook them to death to get rid of any residual crunch and kill the raw flavour, but despite all the cooking in the marmalade, that raw flavour persisted.  Knowing that I should ignore my own particular aversion, and that flavours mature in the jar, I took a gamble and entered it.  I'm so glad I did!

So that is a bit of good news, and as you might have guessed, all my sewing plans have gone completely down the drain.

This week's featured project comes from Heulwen, who has scooped second prize in the Scottish Quilting Show with her gorgeous Shibori Hanabi wall hanging.  If you haven't seen her blog post yet, nip over now and see more.

Remember, FMQ is FMQ, whether your machine was made last week, or it is older than your granny.

4.  The link up will remain open for five days, from midnight to midnight GMT for the long weekend, Friday to Tuesday.